Lufthansa is a large airline holding company which includes several other brands. An investment in Lufthansa can therefore be interesting when you want to invest in aviation. In this article we will discuss how to buy Lufthansa shares & you can also find the current stock price directly here.

Where can you actively invest in Lufthansa shares?

Aviation is very competitive: due to the small profit margins, there is little room for error. When the economy is not doing well, business results can come under direct pressure. This happened, for example, during the corona pandemic: because most countries closed their borders, there was hardly any flying. When you buy Lufthansa shares, you would lose a lot of money at such a time.

Fortunately, there is a clever way of taking advantage of exchange rate fluctuations of this kind. You can open trading positions on both falling and rising share prices by using CFDs. A CFD is a derivative with which you only speculate on price movements, without actually buying the stock. You can try this way of active trading for free with Plus500, use the button below to open an account directly:

How can you buy Lufthansa shares?

Of course, there are always set-backs that put pressure on the aviation industry. An example of this is the increasing attention paid to the climate: flying is very polluting and more and more governments are trying to promote alternatives. For long-distance travel, however, air travel is still the only logical choice. Airlines such as Lufthansa are therefore certainly still needed.

If you want to buy Lufthansa stocks, it is best to do so at a broker with low transaction costs. A good example of this is eToro. At eToro, you can buy shares without paying commissions. Use the button to directly open an account with eToro:

What is Lufthansa's stock price?

Are you curious about the current share price of Lufthansa? Understandable! On this page you can immediately see how Lufthansa's CFD share has developed over the past period. You can use the buttons to open a position on the stock.

About the company Lufthansa 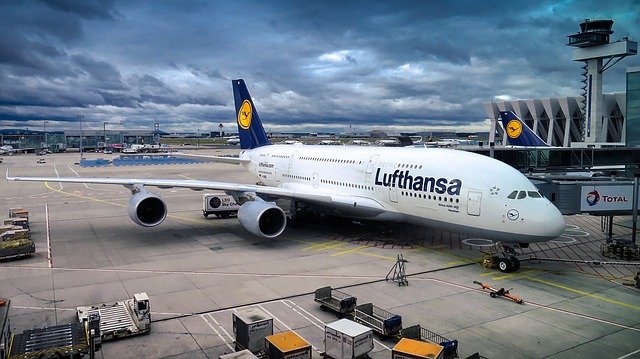 The establishment of Lufhansa

The airline Lufthansa has been established twice. In 1926, the merger of Deutsche Aero Loyd (DAL) and Junckers Luftverkehr led to the creation of the company. The name Lufthansa combines the words Luft (air) and Hansa (of the Hanseatic League, known for its trade). In 1945, the airline collapsed together with Nazi Germany. The company was liquidated in 1951. The company Aktiengesellshaft für Luftverkehrsbedarf, founded in Berlin in 1953, bought the Deutsche Lufthansa brand name in 1954 and continued under that name.

The activities of Lufthansa

Lufthansa is not only engaged in the transport of passengers and freight by air. The company is also responsible for the IT services, catering and logistics at the airport. The company's activities are divided into 5 segments:

A company with an excellent reputation

Lufthansa is known for delivering excellent quality. For example, Lufthansa Technik is the global leader in the maintenance and repair of airline aircraft. The airline also plays an important role in the field of catering. This segment of the company has operations at around 250 airports worldwide and serves more than 300 airlines. In 2019, Lufthansa sold its European catering business to the Swiss company Gategroup.

Mergers with other airlines

Lufthansa has taken over several airlines:

In April 2020, Lufthansa, like other airlines, will be in trouble. While the costs continue, money is no longer coming in because of the corona crisis. In order to save the company, the airline's pilots are prepared to surrender 45% of their salary for two years. This amounts to EUR 350 million. This sum can be used to help Lufthansa.

Do you think aviation will improve after the pandemic? In that case you can wait for a suitable moment to buy Lufthansa shares.