Are you thinking about buying ABN AMRO shares? Then it is important to analyse the economic situation first. Experience has shown that bankruptcy can be expensive for shareholders. In this article, you can read how to invest in ABN AMRO. You can also read about the development the stock has gone through. Finally, on this page, you can consult the current stock price of the ABN AMRO share.

How can you actively invest in ABN AMRO shares?

You can also choose to actively invest in ABN AMRO shares. Active investing has the necessary advantages. Active investing allows you to respond to the latest market conditions. For example, you can sell shares when things are not going so well for a while. You can even choose to open a short position: you can bet on a falling price. But with which party is it best to actively trade in ABN AMRO shares?

A good party for active trading is Plus500. Plus500 allows you to actively trade in ABN AMRO with CFDs. CFDs give you a lot of flexibility and with orders, you can adapt your trading strategy as much as possible to the latest developments. With the button below you can instantly open a free demo account with Plus500:

Where can you buy ABN AMRO stock?

Would you like to buy ABN AMRO shares? Then it is important to first analyse the market conditions. Do you think the economy will do well in the coming period? Then buying ABN AMRO shares may be wise. At eToro, you can buy all known Dutch stocks without any transaction fees. Use the button below to try eToro for free with a demo:

What is the current stock price of ABN AMRO?

Is it wise to invest in ABN AMRO shares?

Before investing in ABN AMRO shares, it is advisable to thoroughly investigate the (Dutch) economy. Banks do particularly well when the economic situation is prosperous. When there is a lot of uncertainty about the future, it can be unwise to invest in a company like ABN AMRO.

It is also important to remember that 56% of the ABN AMRO share is owned by the Dutch government. The government's interest is often not commercial: government decisions can therefore limit the company's profitability.

A good point of the ABN AMRO stock is the strong business & private banking department. Even with low-interest rates, the bank can achieve profitable results with these activities. This can make investing in ABN AMRO shares attractive.

The origins of ABN AMRO

The ABN AMRO was founded in September 1991. At that time, the two largest general banks in the Netherlands merged. It was a merger between the Algemene Bank Nederland (ABN) and the Amsterdam Rotterdam bank (Amro). The motives for merging were economies of scale and internationalization.

Is investing in ABN AMRO wise?

Before you buy ABN AMRO stocks, you should consider whether it is currently wise to invest in the bank. Banks usually do particularly well in economically favourable times. When things go badly, you see that the share prices of banks plummet first. The risk of bankruptcy also increases sharply.

When considering investing in ABN AMRO it is therefore, wise to look at the larger economic picture. Buying ABN AMRO stocks have the necessary potential advantages:

Keep in mind, however, that investing involves risks. ABN AMRO is the textbook example of a share that shows that losing your entire investment is possible. That's why you should make sure you have an adequate risk diversification when investing in ABN AMRO shares by investing in other sectors and countries as well.

Merger or acquisition in 2007?

In 2007, the Royal Bank of Scotland, Fortis, and Banco Santander jointly made an offer for ABN AMRO. They wanted to acquire ABN AMRO. Barclays had made an offer before. That bank wanted to merge with ABN AMRO, but it became a takeover. ABN AMRO came into the possession of the consortium of the three banks mentioned. The new owners split up the bank. Each owner got a certain part of the bank.

During the credit crisis in 2008, Fortis got into trouble. The cause was the financing of the acquisition of ABN AMRO. The Fortis stock price fell sharply. The governments of the Benelux countries decided to proceed with nationalization.

Fortis was fully nationalized in 2008. The Dutch government bought Fortis' Dutch activities, Fortis' insurance arm, and Fortis' share in ABN AMRO. Subsequently, the government decided to integrate both banks Fortis and ABN AMRO with each other. 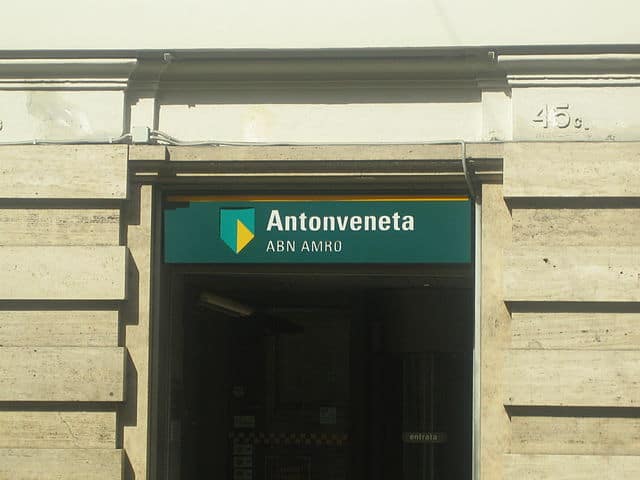 The European Commission approved the acquisition of ABN AMRO by Fortis in 2007. However, a requirement was set. Several parts of the ABN-AMRO business unit in the Netherlands acquired by Fortis had to be divested from ABN-AMRO.

In 2010, these parts were sold to Deutsche Bank. In 2019, the Dutch State had given ABN AMRO EUR 2.6 billion to pay for this divestment, also known as the EC Remedy. Nothing stood in the way of a merger and integration of ABN AMRO and Fortis.

The merger took place on 1 July 2010. What are the main activities of the new ABN AMRO? The bank is mainly active in the Dutch retail market. In addition to the retail market, the bank is also active in private banking for various countries in Europe and Asia. Another activity is merchant and corporate banking in the Netherlands and abroad.

How can you buy ABN AMRO stocks?

Would you like to know at which brokers you can best invest in ABM AMRO stocks? Take a look at our overview of the best brokers to invest with:

ABN AMRO is one of the largest banks in the Netherlands with over 22,000 employees. Nowadays, the bank is largely owned by the Dutch state. The company's head office is located in Amsterdam.

The name ABN AMRO has only existed since 1991; before that, ABN and AMRO were two separate banks under the name Amsterdamsche bank and Rotterdamsche bank. However, the bank did not always do well; at the time of the credit crisis in 2008, ABN AMRO had to be nationalized because the bank was on the verge of collapse.

The government eventually bought the bank for almost 17 billion euros when it ran into trouble. Had the government not done so, the bank would probably have fallen over, which would have disastrous consequences for the Dutch economy. In addition to the acquisition amount, the government also injected many billions of euros in capital to keep the bank afloat.

On Friday 20 November the ABN AMRO was brought back to the stock exchange for the opening price of 17 euros and 75 cents. After the opening, the share immediately rose by a few percent, which ensured that the private investors who had priority when subscribing to the shares earned millions of euros.

Initially, around 20 percent of the bank was floated on the stock exchange. At a later stage, the government will also sell the rest; the proceeds for the government from the ABN AMRO stock will therefore depend on further price movements.

Do you have to buy ABN AMRO shares?

Whether it is wise to buy ABN AMRO shares is not always clear; opinions differ. Attractive to the share is the reorganization and the broad dividend policy. The bank promises substantial dividend payments.

The stock price is also reasonably stable because the government will have to sell even more later. As a result, a sharp decline is unlikely, certainly in the short term. However, this also applies in the other direction; do not expect huge increases. The bank is now much more regional than before and few exciting things are being done.

Finally, the regional is of course also a risk: if the Dutch economy performs badly, the ABN AMRO stock will also fall.

What is the best way to invest in ABN?

The best way to invest in ABN AMRO is probably to time your purchases and sales. By buying and selling at the right time, you can benefit from smaller price changes. This makes you less sensitive for the long term-effects of the economy.