IBM used to be a well-known computer manufacturer which made several major inventions. Nowadays, the company no longer makes computers, but IBM is still very active in processing and analysing information. In this article we look at how to buy IBM shares and you will also find the current stock price of the company IBM.

How can you actively invest in CFD IBM shares?

The growth of the company IBM has been disappointing in the recent period. As a result, its share performs less well than some of its competitors. It may therefore be more attractive to actively trade CFD shares rather than buy them for the long term. By actively trading, you can respond to current trends. If the company does less well, you can still achieve a positive result with a short position.

For this, you do need an account with a broker that enables active trading. A good option for this is Plus500. Plus500 allows you to trade the price of all known CFD shares. Would you like to try the free & no-risk options with a demo? Use the button below to open an account:

How can you buy IBM shares?

If you have confidence in the company, you can consider buying IBM shares. By selling the computer division, they can fully shift their focus to the more profitable product groups. However, this does involve risks: IBM depends on a smaller group of divisions that bring in most of the revenue.

When you want to buy the shares and you have applied sufficient analysis, it is important to do this at an advantageous party. We recommend a broker such as eToro, because you do not pay commissions there when you buy IBM shares. Use the button below to open an account with eToro:

Is it smart to invest in IBM?

There are plenty of arguments in favour of investing in IBM. The strength of the company's existing patents is already great. Moreover, they are constantly trying to innovate so that they can apply for more profitable patents. They have also succeeded in creating more and more economies of scale, thereby increasing the company's competitiveness.

However, there are also concerns about IBM's performance. For example, many investors doubt whether IBM can keep up with the competition. Growth is disappointing compared to many competitors. You could see this, for example, in their approach to the new cloud technology. They did not succeed in beating the competitors Microsoft Azura and Amazon AWS despite huge investments in research. In the future, IBM's cloud services may be able to capture a larger market share, thereby contributing better to the company's profitability.

An investment in IBM can also be interesting for the investor who is looking for a nice dividend yield. The average payment of 5% per year is higher than that of other companies in the S&P 500. However, it is important to remember that the company is still rediscovering itself: a long-term investment in the company is therefore anything but risk-free. 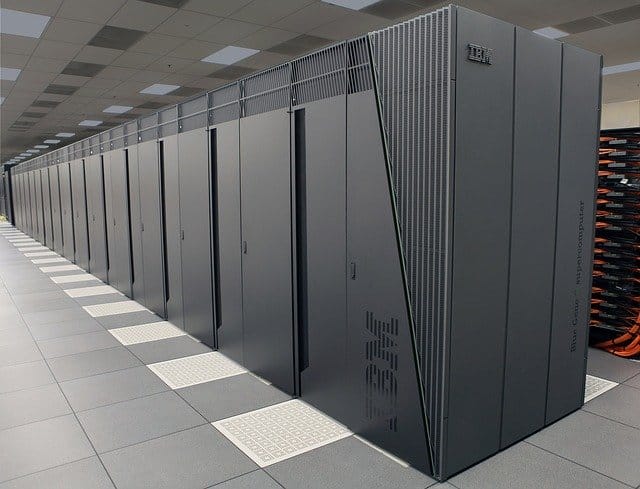 What is IBM's stock price?

Would you like to know how the CFD stock price of IBM has developed? In the graph below you can buy the IBM CFD share directly by using the buttons.

IBM (International Business Machines Corporation) is one of the largest IT companies in the world. The company has offices in more than 70 countries serving customers from more than 170 countries. Its activities include computer hardware and software, computer technology and the provision of services to companies in the IT sector. This powerful company with the blue logo is nicknamed Big Blue. IBM is headquartered in Amonk, New York.

The long history of IBM

IBM has a long history of innovation that begins in the 19th century. At the end of the 19th century there were all kinds of pioneering companies. They were small companies with revolutionary inventions in the field of information processing.

One such company was, for example, the Tabulating Machine Company founded by Hollerith in 1896. Herman Hollerith is the inventor of a data processing machine that works with punch cards. His company merged in 1911 with two other companies, the computing Scale Company and the International Time Recording Company, to form CTR (Computing Tabulated Recording Company). The name of this company was changed to INTERNATIONAL Business Machines (IBM) in 1924.

At IBM, everything is about information from the very beginning. The pioneering companies at the end of the 19th century were already looking for ways to store, calculate and pass on information. IBM's products, such as the PC and the Watson system, also arose from the need to store and process information. The Watson system could analyse and interpret texts in an advanced way.

The company has an extensive research department. IBM has several inventions to its name. Some examples are Dynamic Random Access Memory (DRAN), the floppy disk, the hard drive, the magnetic strip card, the relational database, the virtual machine and the barcode of the Universal Product Code (UPC).

As a result, the company owns many patents which still allow it to generate income. This may be a good reason to invest in IBM.

The organizational structure of IBM

IBM is best known for the Personal Computer that the company launched in 1981. The PC developed by IBM could also be built under licence by other companies. However, in 2004 the company decided to sell its PC department to Lenovo. They did this because, according to IBM, making PCs was no longer a strategic goal of the company. Lenovo paid around $2 billion for this acquisition.

The sale allows IBM to better focus on its main tasks. This allows the company to achieve better results in theory, which can be a good reason to buy IBM shares. At the same time, the company now has less diversification, which in turn has increased the risks. Therefore, analyse whether it is a good time to invest in IBM shares.

To a Smarter Planet

Smarter Planet is a vision of a smarter world introduced by the company in 2008. Smart systems developed by the company can be used to extract information from the overwhelming amount of data created daily. This enables the company's customers to gain new insights, make better predictions and make better decisions.

Do you think that IBM will achieve better results with the large-scale information systems in the future? In that case it may be attractive to buy IBM shares.