When you buy Deutsche Bank shares, you invest in the largest European bank. Yet, this bank is certainly not completely ‘clean’. The Deutsche Bank makes various dubious investments and the results have not always been good. In this analysis, you will read everything you need to know before investing in Deutsche Bank. You can also request the current Deutsche Bank stock price here.

Where can you buy Deutsche Bank shares?

How can you actively trade in Deutsche Bank?

When you have the time to study the price in detail, you can take advantage of the smallest price movements. If you had bought Deutsche Bank shares, and they get fined, this would not have been good for your investment. As an active trader, however, you can take a short position with which you speculate on a decreasing price.

But where can you actually actively trade in Deutsche Bank shares? A good party to do this is Plus500. With Plus500 you can actively trade CFDs entirely risk-free with a demo. Use the button below to open a free demo account straight away:

Are you curious about the current Deutsche Bank share price? Below you can see the CFD price of this interesting bank. You can also use the buttons to directly open a position whenever you want.

Then you have to think about the amount of money you want to buy Deutsche Bank shares for. With some brokers, you can invest as little as $100 in Deutsche Bank shares. This allows you to invest even a small amount in this well-known bank. It is recommended that you do not deposit more money into your investment account than you use immediately: at some brokers, you pay costs over unused money in your account.

As soon as your account is ready to make investments, you can place a share order. You can choose between a market order with which you buy the shares directly at the current price and a limit order with which you can set a price at which you buy the shares. The costs you pay for your share order vary widely: some brokers do not charge any purchase costs at all, while other brokers charge you a few pounds for each order.

Deutsche Bank was founded in Berlin in 1870. The bank’s head office is located in Frankfurt am Main. Deutsche Bank is a global bank with a focus on the business market. The bank consists of three parts, each of which focuses on individual activities: 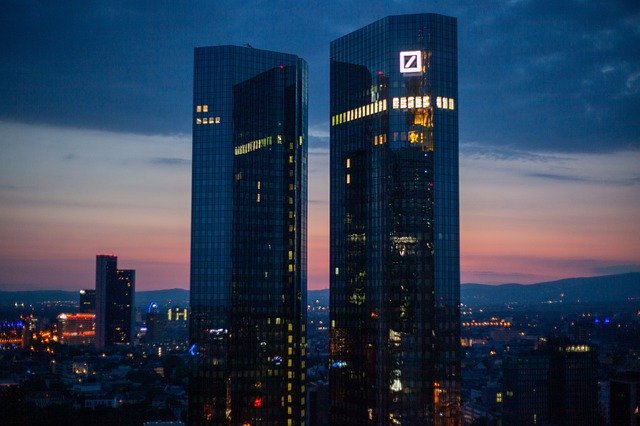 Deutsche Bank is an internationally operating bank that wishes to remain one of the largest European parties. Nevertheless, competition is fierce and the bank will have to stay ahead of these parties. But which banks are actually the company’s biggest competitors? According to our analysis, you have to watch out for the following other companies:

Before you buy Deutsche Bank shares, it is interesting to look at the shares of these banks as well. That way, you can see whether an investment in Deutsche Bank is really the best decision. Will another bank perhaps perform better in the future? Then it would be better to buy shares in that company.

Why can investing in Deutsche Bank be sensible?

The internationally strong position is, of course, a good argument in favour of buying Deutsche Bank shares. The bank is the largest European bank and its extensive range of services allows it to serve different types of customers. These include individual, private clients, but also large asset managers. This diversification reduces the bank’s dependence on one type of service or on one specific region.

Another advantage is that the Deutsche Bank brand is very well known. Recognizability is an important factor in the success of any company. Because the brand name is already very well-known, customers will be more inclined to choose Deutsche Bank. Nevertheless, investing in Deutsche Bank also involves the necessary risks.

Another risk that applies to the entire banking sector is the increasingly stringent legislation. Banks have to comply with more and more rules, and they have to incur many extra costs to comply with all the new regulations. This is also a risk for Deutsche Bank. If the bank makes a bad decision, the company can count on hefty fines.

Deutsche Bank’s reputation has also had some dents in the past. For example, the company has made several dubious investments, received several fines and carried out a major reorganization. In the rest of this analysis, we will discuss these individual events in more detail.

The Deutsche Bank has been widely criticized for investing in certain unethical companies. For example, EUR 1.7 billion was invested in companies guilty of deforestation and human rights violations. The bank also has contacts with the companies Enzi and Bayer, which seriously damage the environment.

Sustainable investment is receiving more and more attention. If consumers find it more important for companies to operate responsibly, this type of investment can ruin a company’s reputation. Do you believe that people will be less likely to do business if Deutsche Bank continues these practices? Then perhaps it would be better to postpone buying Deutsche Bank shares.

Deutsche Bank has had to pay various fines in the past. For example, in 2015 the bank paid a fine of around USD 2.3 billion to UK and US regulators. This was a Labour-related fine.

In 2016, the Bank had to pay a fine because of the junk mortgages in which the company was active. The Bank could reach a settlement with the US government for USD 7.2 billion, of which USD 3.1 billion was a fine. The remainder was used to relieve the mortgages of aggrieved US customers.

This type of business is, of course, not good for a bank’s reputation. The price of a share is determined by the interplay of supply and demand between buyers and sellers on the stock exchange. If a bank continues to do shady things, this can have a negative impact on the share price. Pay attention to this before investing in Deutsche Bank shares.

Disaster year for the Deutsche Bank

Do you think this reorganization is going to be beneficial? Then this could be a good time to buy Deutsche Bank Shares. However, a reorganization can also be detrimental. Perhaps they have dismissed the wrong employees and this will be at the expense of the company’s profitability. It is important to make a proper analysis of the bank’s future capabilities before you buy the shares.

The history of Deutsche Bank

The Deutsche Bank was set up in Berlin in 1870 to promote the financing of trade and German exports. The bank was meant to facilitate trade relations between Germany, other European countries and overseas territories. The bank opened branches in Shanghai (1872), London (1873) and South America (1874-1886), among others. The bank also financed major projects such as the North Pacific Railroad in the US. Alliances were formed with regional banks in the second half of the 1990s.

In the years 1993-1945, the Deutsche Bank played a dubious role. For example, it was involved in the restructuring of Jewish companies. In November 1938, the bank was involved in 383 seizures. It also admitted its involvement in the construction of the Auschwitz concentration camp.

After the Second World War, the Allies ordered the bank to be divided into 10 regional banks. Following a merger in 1952, three banks were created and merged into Deutsche Bank AG in 1957. In the 1970s, the bank expanded into new regions, opening new branches in Moscow, Tokyo and London, among others. Through acquisitions of other banks, the company grew.